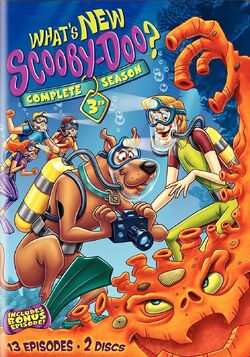 The series that brought Scooby-Doo and the Mystery Inc. crew into the 21st century ends its run with Season 3's serving of 13 spiriting episodes that put our heroes through all kinds of kooky, spooky paces in faraway places. Giddy up to take on a robot Western outlaw (Go West Young Scoob). Experience Paris, supermodel stardom...and a giant gargoyle?!? (Ready to Scare.) Go down under (Reef Grief!) and learn that building sand castles is not child's play. Seems the more you travel the scarier monsters are, as these and 10 more creepy comic capers demonstrate. And be sure to check out the Ghoultide Bonus Episode along with several Special Features.

Retrieved from "https://scoobydoo.fandom.com/wiki/What%27s_New,_Scooby-Doo%3F:_Complete_3rd_Season?oldid=301685"
Community content is available under CC-BY-SA unless otherwise noted.