Based on characters created by Joe Ruby
Ken Spears

The show follows the original mystery-solving formula of the series, but done in a more real manner compared to the previous shows, with the classic gang encountering monsters who invariably turn out to be people in disguise. Most of the stories make an attempt to modernize the Scooby universe by introducing plots spotlighting modern trends and technology, such as the Internet. The characters remain mostly the same as always, with a few cosmetic changes (most notably, Fred no longer wears his famous ascot in this series but instead has a blue stripe), and a few minor personality changes (most notably Fred being less intelligent than he was in the franchise prior to the late 1980s.)

With Don Messick's retirement in 1996 (and death the following year), Frank Welker, the voice of Fred, took over as Scooby. Casey Kasem returned as Shaggy (only after being promised Shaggy would be a vegetarian), Grey DeLisle took over Daphne's role, having previously assumed the role in 2001 for Scooby-Doo and the Cyber Chase, while former Facts of Life actress, Mindy Cohn, took over Velma's. The new show follows the same format as Scooby-Doo, Where Are You!, updated somewhat for the 21st century, but with new-age music genres and unique newly recorded Foley effects to replace the classic Hanna-Barbera sound effects. The show was produced by Warner Bros. Animation, the studio famous for bringing Looney Tunes to life, which had by this time absorbed Hanna-Barbera Cartoons. (It should be noted, however, that the copyright notice at the end of each episode credits "Hanna-Barbera Cartoons, Inc." as the author). 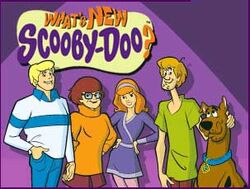 The series was first announced on January 15, 2002 as a joint venture between Kids' WB and Cartoon Network, with the working title of All-New Scooby-Doo! The Animated Series.[1]