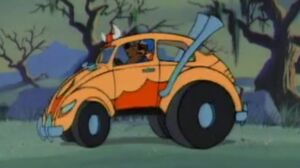 The Werewolf Wagon, also called the Werewolf Car, was a vehicle that Shaggy Rogers once used.

Following Shaggy's maintenance on the vehicle, it showed the following functions:

Shaggy Rogers, now a werewolf, was forced to drive the Werewolf Wagon as the replacement Werewolf in Count Dracula's race. Before allowing Shaggy and Scooby-Doo to race in the car, he had the malicious Hunch Bunch reverse its various functions to hinder Shaggy's abilities to race, therefore trapping him as a werewolf for good. Fortunately, Shaggy was able to fix the race car and successfully win the race.

Retrieved from "https://scoobydoo.fandom.com/wiki/Werewolf_Wagon?oldid=322636"
Community content is available under CC-BY-SA unless otherwise noted.