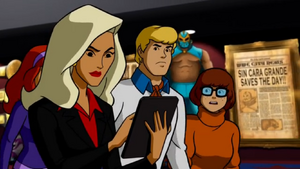 WWE City News is a newspaper in WWE City.

The front page of Sin Cara Grande saving the citizens of pre-WWE City from Vicious was on display at WWE City's stadium's commerative wall section, which was later destroyed by the Ghost Bear during the power cut at WrestleMania.

Retrieved from "https://scoobydoo.fandom.com/wiki/WWE_City_News?oldid=162864"
Community content is available under CC-BY-SA unless otherwise noted.