For a full list of what Velma wears, see Velma's outfits and disguises

Velma is a teenage female, with chin-length auburn hair and freckles. She is somewhat obscured by her fashion choices, wearing a baggy, thick turtlenecked orange sweater, with a red skirt, knee length orange socks and black Mary Jane shoes. Velma has a slightly wider waist than the thinner framed Daphne Blake, as seen when both are dressed in swimwear, but this may be exaggerated due to her sweater, which makes her look somewhat heavyset. Her facial shape is also more circular/square compared to the ovular shape Daphne. She is also well known for her thick-framed, square glasses.

Velma was inspired by Zelda Gilroy (played by Sheila James) on the early 1960's sitcom The Many Loves of Dobie Gillis.[10] Although the characters are quite different, in that Zelda would scheme to get the Dobie (the Fred type), instead of the hippy, being Maynard. In the unrelated Scooby-Doo! Mystery Incorporated, Velma was very interested in Shaggy.

Velma from A Pup Named Scooby-Doo.

Velma out of her trademark sweater. 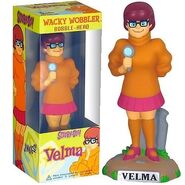