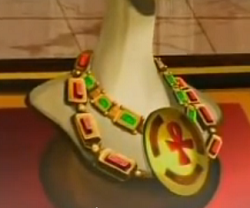 Vincent Van Helsing's vampire museum had a set of vampire wedding jewelry on display, consisting of a necklace and a crown.

Van Helsing said it had been used in an actual vampire wedding ceremony in Walachia, but the claim is highly dubious. It was stolen by Lord Valdronya and given to the Fangenschanz actors to set up Daphne Blake as the vampire's bride.

Ultimately both pieces were thrown at Valdronya and ended up in the swamp. Tulie found and kept the crown.

Retrieved from "https://scoobydoo.fandom.com/wiki/Vampire_wedding_jewelry?oldid=134999"
Community content is available under CC-BY-SA unless otherwise noted.