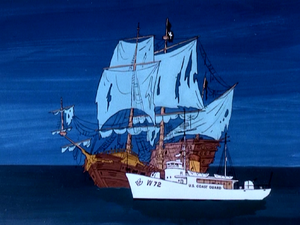 The Sheriff and the Coast Guard were baffled by the mysterious disappearances of yachts (which Mystery Inc. had found out had been due to thefts done by Captain Cutler and his wife).[1]

An officer arrested C.L. Magnus and his henchmen[2] when they realized they were stealing cargo while dressing up as pirates.

An officer responded to the gang's SOS just after they caught Mr. Carp, Mr. McGil, and Mr. McFinn.[3]

Retrieved from "https://scoobydoo.fandom.com/wiki/United_States_Coast_Guard?oldid=387877"
Community content is available under CC-BY-SA unless otherwise noted.