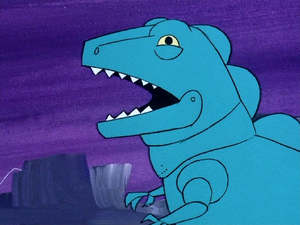 Tyronosaurus Rex, Tyrone for short, is a mechanical T. rex.

It is a machine built to resemble a life-size tyrannosaurus rex. Its outer casing is made of blue-green plastic[Note 1] and has black eyes with yellow sclera. Its mouth is operational, making it able to dig up the ground, and it also has wheels under its feet, making it easy to move from one place to the next.

Moe said that Tyrone was just a model for the 3 Stooges Ghost Town's playground. When the Three Stooges take them to see out in the desert, the gang discovered that it's hollow and it may be possible to go inside. Scooby-Doo inadvertently found the opening when falling on one of the claws on the back of its feet. They found a tape recorder inside which had making its roars, scaring everyone into thinking that it was alive.

Later, Scooby-Doo and Shaggy Rogers used it to dig out the rest of the gang and the Three Stooges, which took a while because Shaggy accidentally pulled out a control dial causing Tyrone to go crazy before fixing it. Then he used the dugged up rock to stop Amos Crunch and Rhino from escaping.

It was revealed Rhino and Crunch had been playing the tape recording continuously to hide the noise of the dynamite they were using to mine for uranium.[1]

Retrieved from "https://scoobydoo.fandom.com/wiki/Tyronosaurus_Rex?oldid=199505"
Community content is available under CC-BY-SA unless otherwise noted.