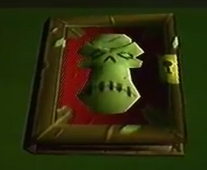 The Tome of Doom is an ancient mysterious book that had the ability to capture and release spirits, as long as if it has the correct pages to do so.

The book was found and displayed at the Hambridge University Library, however a librarian agent of ShermanTech (also calling themselves Greenwood Development), called Walter Peabody, stole the Tome of Doom and hid it in the basement, while also creating a fake replica to put on display, instead. He also ripped out several of its pages and sent them to different locations. He sent some to Robert Zaprinksi, who was trying to buy the Milton Brothers Movie Studio, to Mindi Stiles, who was at the Gold Mountain Western Theme Park, unknown agents at a creepy bayou and ShermanTech Headquarters. They were used to release spirits and monsters there so they could scare away the owners, letting ShermanTech (Greenwood Development) buy the land and use it to build giant antennas which would be used for mind-control. However, a Mystery Inc. managed to stop them by finding the Tome of Doom and all its pages, capturing all the monsters and putting an end to ShermanTech's plot.

Retrieved from "https://scoobydoo.fandom.com/wiki/Tome_of_Doom?oldid=241105"
Community content is available under CC-BY-SA unless otherwise noted.