The Scooby-Doo!/Dynomutt Hour: The Complete Series 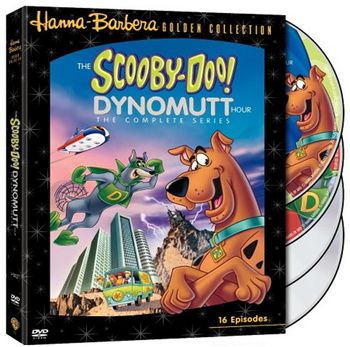 The Scooby-Doo!/Dynomutt Hour: The Complete Series is a four-disc DVD set containing all thirty-two episodes of The Scooby-Doo/Dynomutt Hour, sixteen belonging to The Scooby-Doo Show and the other sixteen to Dynomutt, Dog Wonder. It was released March 7, 2006 by Warner Home Video.

On 4 delightful discs, the Complete Series of The Scooby-Doo/Dynomutt Hour (plus 3 episodes from the Scooby-Doo/Dynomutt Show) chronicles the outlandish animated union of man and beast to solve crimes - and brings comic relief to the kid in everyone! As the catchy theme song celebrates: "...while Scooby is haunted by a spooky ghost, Dynomutt is doin' what he does the most!" That means becoming a mechanical menace to the bad guys and faithfully assisting his action-hero comrade The Blue Falcon, who programmed all his go-go gadgets.Now you can use your own in-home mechanical gadgets to view Scooby-Doo, Scooby-Dum (a dim-witted cousin first introduced here) and the Mystery Inc. crew whenever you feel like walking and watching the dogs!