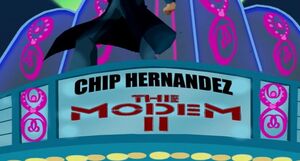 The Modem II is a film starring Chip Hernandez, Jr. It is a sequel to The Modem.

Nobody involved with the remake of Spy Me a River actually wanted to make it, especially the director, Vincent Wong, who tried to sabotage production as the Faceless Phantom. When Chip found this out, they both made a sequel to The Modem instead. Once the film had been made, Mystery Inc. had been invited to the Hollywood premiere, because it wouldn't have been possible to do it without those meddling kids.

Retrieved from "https://scoobydoo.fandom.com/wiki/The_Modem_II?oldid=295927"
Community content is available under CC-BY-SA unless otherwise noted.