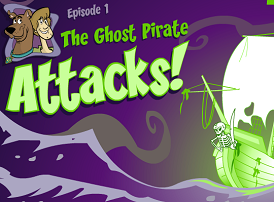 The Ghost Pirate Attacks! is the first level in the four-part Horror on the High Seas online serial computer game.

When Shaggy and Scooby-Doo wake on their cruise ship and find the ship is under attack by a ghostly pirate vessel, they have to elude the pirates and try to figure out what is going on.

Shaggy and Scooby have woken up from their nap and have found that the other passengers are gone and a ghost pirate and his ship have hijacked the ship. They escape off the deck and run into Captain Lawrence, who is also unsure of the ghost pirate situation as he was asleep in his cabin and had just woken up. Due to the power malfunctioning, he directs Shaggy and Scooby to find clues about the ghost pirate on the bridge while he goes to check on the power below deck.

Coming out of their hiding spots, Shaggy hears a strange creepy sound when Scooby tells him that they have what appears to be a monster in front of them.

Retrieved from "https://scoobydoo.fandom.com/wiki/The_Ghost_Pirate_Attacks!?oldid=267110"
Community content is available under CC-BY-SA unless otherwise noted.