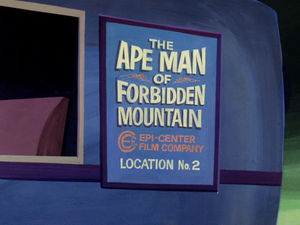 The Ape Man of Forbidden Mountain is a film produced by EPI-Center Film Company and directed by John Maxwell. Its completion was never announced, but presumably it was finished.

John Maxwell directed the film. Not much is known about its plot, but it would have featured an abandoned mansion with many booby traps. Candy's companions presumably would have fallen for these traps or been captured by the Ape Man  until only Candy was left. She would have then confronted the Ape Man on a bridge. Candy was casted as the star in favor of Carl , who sabotaged the film in revenge. Mystery Inc. stopped Carl and unmasked him.

Retrieved from "https://scoobydoo.fandom.com/wiki/The_Ape_Man_of_Forbidden_Mountain?oldid=389733"
Community content is available under CC-BY-SA unless otherwise noted.