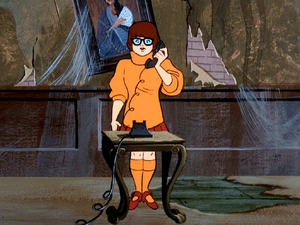 A telephone, or phone, is a telecommunications device that permits two or more users to conduct a conversation when they are too far apart to be heard directly.

As one of the ghosts chased Velma Dinkley, Fred Jones, and Daphne Blake, a rotary dial phone rang, which Velma stopped to answer. She distracted the ghost by saying it was for him.[1]

Shaggy Rogers, Daphne Blake, and Scrappy-Doo, and answered phones while riding in the Mystery Machine to get down at Station ZPOP quick for an emergency.[2]

From the Mystery Machine's phone, Shaggy made an order for a pizza from Louie's Pizza Palace.[3]

Retrieved from "https://scoobydoo.fandom.com/wiki/Telephone?oldid=350531"
Community content is available under CC-BY-SA unless otherwise noted.