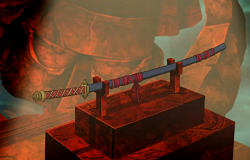 The Sword of Doom is an ancient magical artifact.

The Gang was tricked into finding it and retrieving it by the cunning Miss Mirimoto. She succeeded in reviving the Black Samurai, but refused to serve her, and planned to rule the world forever. At that moment however, Shaggy Rogers and Scooby-Doo arrived on the scene with the Sword of Fate. The duo dueled the Black Samurai taking turns using the Sword of Fate. In the end, Scooby destroyed the Sword of Doom, by slicing it in half. Doing so, purged the evil within the broken sword, freeing the possessed ronin, who died in peace.

Retrieved from "https://scoobydoo.fandom.com/wiki/Sword_of_Doom?oldid=295147"
Community content is available under CC-BY-SA unless otherwise noted.