This article is about the real company. For the fictionalized version, look here. 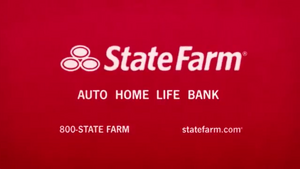 State Farm is a group of insurance and financial services companies in the United States, founded in 1922 by retired farmer, George J. Mecherle. The company also has operations in Canada. The group's main business is State Farm Mutual Automobile Insurance Company, a mutual insurance firm that also owns the other State Farm companies. The corporate headquarters are in Bloomington, Illinois. State Farm is ranked 44th in the 2013 Fortune 500, which lists American companies by revenue.

Warner Bros. Animation produced three Scooby-Doo commercials for State Farm in 2013, all of which were directed by Tony Cervone.

Retrieved from "https://scoobydoo.fandom.com/wiki/State_Farm_(insurance_company)?oldid=314597"
Community content is available under CC-BY-SA unless otherwise noted.