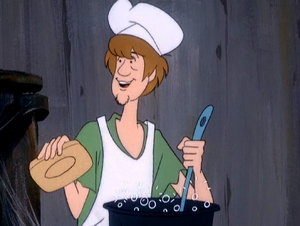 In chemistry, soap is a salt of a fatty acid. Soaps are mainly used for surfacants for washing, bathing, and cleaning.

It was used in a trap to capture the Ghost of Captain Cutler.[1]

Shaggy Rogers and Scooby-Doo were forced to cook for the Ghost of Redbeard and his men, and since they thought they cooking for real ghosts, they didn't think the latter would mind a big bar of soap. When Redbeard told Shaggy and Scooby to test it for him, they hiccuped bubbles, which they used as an escape.[2]

Scooby-Doo used it in his evening bath at Colonel Beauregard Sanders's mansion.[3]

While running away from a hostile orderly, Shaggy slips on a bar of soap, which Scooby accidentally swallowed and started hiccuping bubbles amusing his baby nephew Scrappy. (Scrappy's Birthday)

Retrieved from "https://scoobydoo.fandom.com/wiki/Soap?oldid=304902"
Community content is available under CC-BY-SA unless otherwise noted.