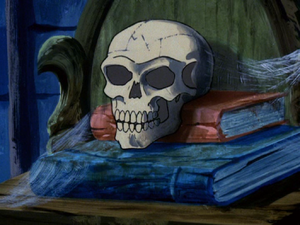 The skull is a prop in Vasquez Castle.

The skull is a realistic prop of a human skull. It is a bone color with signs of aging, including discoloration and cracking, that make it appear original to the castle.

While searching for Daphne Blake, Shaggy Rogers and Scooby-Doo lagged behind Fred Jones and Velma Dinkley, getting lost. After Shaggy wondered where the latter two were, a skull propped up onto some books on top of a dressing table told them, "Thataway". Shaggy politely thanked "him", with it responding, "S'awright". They quickly realised it was a talking skull and ran away -- into another spooky encounter.

Retrieved from "https://scoobydoo.fandom.com/wiki/Skull_(Hassle_in_the_Castle)?oldid=361019"
Community content is available under CC-BY-SA unless otherwise noted.