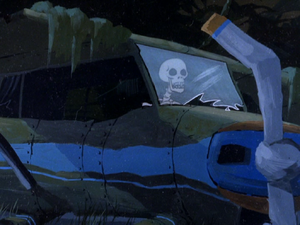 The skeleton is a rigged prop set up in fake plane crash in the ancient village in Hawaii to scare away trespassers (or at least would-be trespassers).

It resembles nothing more than a plain old human skeleton.

When Shaggy Rogers, Velma Dinkley, and Scooby-Doo discovered a "crashed" plane, they found fake vines made of plastic. When Shaggy removed the fake bush, he witnessed a "living", laughing skeleton, which nearly made him faint. Upon inspection, though, it appeared to be operated by a wire that Shaggy tripped. Before they left, Shaggy decided to get the "last laugh" by making a joke. However, the skeleton started laughing again as if it were real. The gang then ran from hearing its sinister laugh.[1]

Retrieved from "https://scoobydoo.fandom.com/wiki/Skeleton_(A_Tiki_Scare_is_No_Fair)?oldid=198450"
Community content is available under CC-BY-SA unless otherwise noted.