APNSD: A Bicycle Built for Boo!

Norville "Shaggy" Rogers is the owner and best friend of Scooby-Doo. They live in Coolsville and are members of the junior sleuthing group, the Scooby-Doo Detective Agency.

Shaggy has black eyes, has dark blonde /dusty brown hair, a bulbous nose, and is taller than the rest of his friends. He wears a green shirt, cuffed blue jeans, and grey sneakers.

Shaggy, along with his buddy Scooby-Doo, are the goofballs of the group. They both have a larger than life appetite and are easily spooked by ghouls, ghosts, and other creatures they encounter. Shaggy says "Like" and "Zoinks" frequently as they are his go to catchphrases. Both Scooby and Shaggy can be easily bribed with Scooby Snacks in order to act as the gang's live bate when it comes to catching kooks. The reason Shaggy eats so much (and maintains his slender physique) is his "high metabolism". 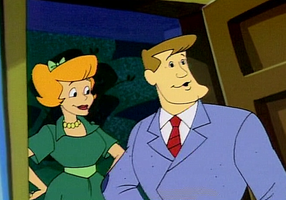 Shaggy's father is a member of the police and the profession of Shaggy's mother is unknown. The name of Shaggy's parents are not revealed in a Pup Named Scooby Doo but they are referred to by Shaggy as "Moms and Pops".

Shaggy also has a little sister named Maggie who is nicknamed Sugie.