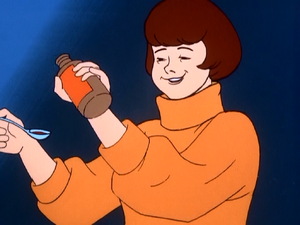 The cough syrup was medicine for Shaggy Rogers. Velma Dinkley carried it for Shaggy, perhaps because he was too irresponsible himself to look after it.

The cough syrup was a dark liquid contained in a stout brown bottle with a red label.

Velma lost her glasses and mistook the sound of the Black Knight grunting for Shaggy's cough. She poured a spoonful of cough syrup and delivered it straight into the mouth of a surprised Shaggy who chanced upon her and realized that the Black Knight was right beside them.

Retrieved from "https://scoobydoo.fandom.com/wiki/Shaggy_Rogers%27s_cough_syrup?oldid=360378"
Community content is available under CC-BY-SA unless otherwise noted.