Scoobypedia
Register
Don't have an account?
Sign In
Advertisement
in: Actors within the Scooby-Doo universe, Animated film characters, Babysitters,
and 13 more

For a full list of what Shaggy wears, see Shaggy's outfits and disguises.

Shaggy is a lanky, teenage male; he is fairly light for his age—even Velma Dinkley can pick him up with her own hands. He seems to have a very long neck. He also has whiskers on his chin, forming somewhat of a goatee. During his time as a werewolf, his irises are bluish green.[3] 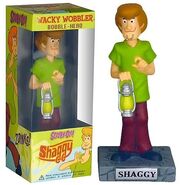 Pop! combo with Scooby by Funko.