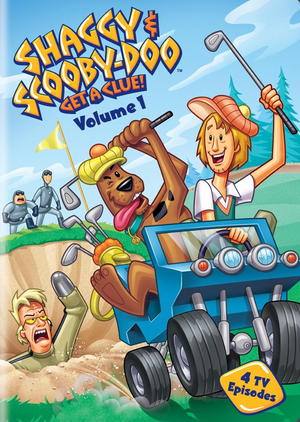 In this frisky debut volume of adventures from the cool new CW Kids series, Scooby-Doo goes from SHAGS TO RICHES when Shaggy inherits a |fortune from his Uncle Albert, a genius inventor now in hiding to escape the evil schemes of Dr. Phibes. Home in Shagleford Manor with bumbling butler Robie the robot, they must often fend off the schemes of Phibes' bumbling spies. And before they're mansion-broken, Shaggy breaks in a new tricked-out Mystery Machine en route to Switzerland to foil a global warming plot (MORE FONDUE, SCOOBY-DOO). Then they infiltrate a HIGH SOCIETY country club and literally drive the members and Phibes' baddies crazy - all while nabbing tall the free eats they can! Finally, it's time to PARTY ARTY back home. Will Phibes' evil robot A.R.T. turn the celebration into a smashing failure?

Retrieved from "https://scoobydoo.fandom.com/wiki/Shaggy_%26_Scooby-Doo_Get_a_Clue!:_Volume_1?oldid=365337"
Community content is available under CC-BY-SA unless otherwise noted.