This article is about the standard continuity Scooby Snacks. For other incarnations, see Scooby Snacks (disambiguation).

Scooby Snacks (sometimes spelt Scooby Snax) are a food item used as a form of bribery for Scooby-Doo and Shaggy Rogers.

When Scooby would consume it as a puppy, he loved it so much it would make him shoot off like a rocket.[1]

When the gang was young there was a Scooby Snack factory in Coolsville which was troubled by a Cheese Monster.[2]

A large supply of Scooby Snacks was the big prize at the gang's favorite TV show, For Letter or Worse.[3]

Mystery Inc. visited the factory where the snacks were manufactured, in Munchville, Ohio.[4]

They were found on sale in a vending machine in Japan.[5]

Producer William Hanna had always imagined that a "Scooby Snack" would taste like some sort of a caramel-flavored cookie (the batter, however, is colored like brown sugar and similar in color to butterscotch),[citation needed] and he and Joseph Barbera had previously used the concept of a dog that goes wild for doggie treats in the Quick Draw McGraw series in 1959, with Quick Draw's dog, Snuffles.

Furthermore, in the "Mystery Inc. Yearbook" featurette on the Scooby-Doo's Creepiest Capers DVD, it is explained that a Scooby Snack tastes like a Butterscotch Morsel.

Other uses of the term 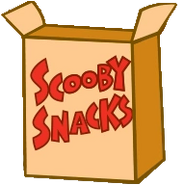 Retrieved from "https://scoobydoo.fandom.com/wiki/Scooby_Snacks?oldid=377913"
Community content is available under CC-BY-SA unless otherwise noted.