The Scooby-Dooby doors effect is another example of toon physics. Characters being chased through a set of rooms connected to a hallway, or being hunted in a set of containers with no connection at all, can appear in new places without any regard for how they got there. (The term is borrowed from TV Tropes). 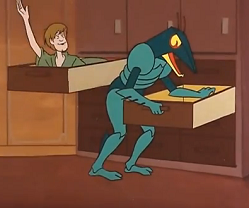 In the example here, the Mantis hunted through a set of drawers where he had seen Scooby-Doo and Shaggy Rogers hide themselves. He looked in vain because they kept showing up in different drawers than the one he looked in. Finally, they came out of a closet on the other side of the room, with Shaggy remarking that he had no idea how they did it. They quietly crept away while the Mantis was still looking. (The Creepy Creature of Vulture's Claw)

In this example, the lieutenant and the gang chased the No-Face Zombie through a series of doors with everyone going through different doorways and then coming out another in the same hallway. After this, Fred Jones, Daphne Blake, and Velma Dinkley came out of a door on a forklift and crashed in the No-Faced Zombie. (The No-Face Zombie Chase Case)

In a crossover with Supernatural, Mystery Inc. along with Sam and Dean Winchester and the angel Castiel run through a series of doors in Beauregard Sanders' mansion chased by a real ghost. After running through several doors, Mystery Inc. tries to board up all of the doors to keep the ghost in while Dean checks out Daphne. However, the ghost is easily able to simply pass through the doors and boards, forcing the group to run. During this scene, Scrappy-Doo makes a brief cameo running between the doors as well despite not being a part of the episode. (Scoobynatural)

Retrieved from "https://scoobydoo.fandom.com/wiki/Scooby-Dooby_doors?oldid=330630"
Community content is available under CC-BY-SA unless otherwise noted.