Scoobypedia
Register
Don't have an account?
Sign In
Advertisement
in: Articles needing expansion, Direct-to-video films, Scooby-Doo and the Cyber Chase

Scooby-Doo and the Cyber Chase (film)

This article is about the film. For other uses, see Scooby-Doo and the Cyber Chase (disambiguation).

Scooby-Doo and the Cyber Chase is the fourth in a series of direct-to-video films based on Hanna-Barbera's Scooby-Doo Saturday morning cartoons. It was released on VHS and DVD on October 9, 2001.

It is recognized as the last "official" Hanna-Barbera production, as Warner Bros. had fully absorbed Hanna-Barbera after the passing of co-founder, William Hanna, who receives a dedication.

Mystery Inc. face their most dangerous case yet: Cyber space!

To refresh from the previous film the mystery gang visits their old friend, Eric, at his college. Eric invited them because he made a prize-winning computer game based on their adventures using a high-tech laser. They arrive at the same time a scary beast called the Phantom Virus is causing mayhem. It is established that the monster has been "materialized" from the Phantom Virus which has infected Eric's program and that it can be weakened by using high-powered magnets. The suspects appear to be Eric's teacher, Professor Kaufman; Bill, a fellow student who is a baseball-loving programmer; and a grumpy campus security officer, Officer Wembley. During one of the Phantom Virus' scare runs, the gang and the virus are beamed into Eric's ten-level video game. To finish each level, they have to find a box of Scooby Snacks.

On the tenth level, the gang discovers cyber-versions of themselves at a restaurant. They help the gang deal with the Phantom Virus and the guardians of the last box of Scooby Snacks - which are monsters that the gang had faced before: Jaguaro, Gator Ghoul, the Tar Monster, Old Iron Face, and the Creeper. All of them are real in this game, whereas originally, in reality, they were merely people in costumes. The Phantom Virus leads the villains. After a chase through the amusement park, they find the box of Scooby Snacks in the game arcade. Scooby-Doo and his cyber-clone defeat the Phantom Virus, wiping it clean out of the game and existence. Back in their real world the gang, using the Phantom Virus' baseball terms, unmasked his creator as Bill, who had done it out of jealousy towards Eric. Bill confesses that he felt that he deserved to compete in the science fair more than Eric did, especially since he had been going to the college two years longer than Eric had. Bill's arrested by Officer Wembley, and Eric and the gang go to a local restaurant to celebrate their victory. While there, they see the cyber gang, waving to them and Scooby gives his cyberself some Scooby Snacks from helping them.

Like Scooby-Doo! and the Witch's Ghost, this also had studio involvement, but unlike the former, this was almost impossible to save, because the studio forced a contracted writer on the crew, who wrote scenes that were quite difficult to animate in the allotted time and the 2-D animation used.[1] There was a lot of outsourcing after scenes had to be fixed.[2] This led to the disbandment of the "brain trust" that included Davis Doi, Glenn Leopold, Jim Stenstrum, and Lance Falk, who planned to continue working on the series (and had at least one other written), but the studio's inability to leave them alone proved too much.[1] 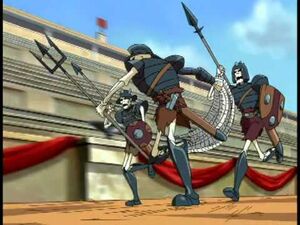 Scooby-Doo and the Cyber Chase Trailer 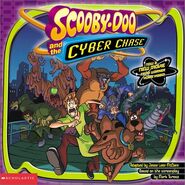 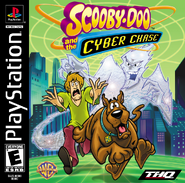 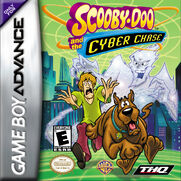