Scoobypedia
Register
Don't have an account?
Sign In
Advertisement
in: Cases set in New Mexico, Direct-to-video films, Scooby-Doo and the Alien Invaders

Scooby-Doo and the Alien Invaders

This article is about the film. For other uses see, Scooby-Doo and the Alien Invaders (disambiguation).

Scooby-Doo and the Alien Invaders

Scooby-Doo and the Alien Invaders is the third in the series of direct-to-video films based upon the Hanna-Barbera's Scooby-Doo Saturday morning cartoons. It was released on VHS and DVD on October 3, 2000.

Mystery Inc. are stuck in the wrong place at the right time to investigate the claims of alien abductions in Roswell, New Mexico, all the while Scooby and Shaggy find their loves.

At the SALF station, Max, Laura, and Steve suddenly get a loud reading that's off the charts. When it disappears, Steve gets something on the radar.

The Mystery Machine is driving through a desert. A sand storm kicks in and Shaggy accidentally makes a turn onto government property, and a subsequent sighting of an UFO causes Shaggy to lose control of the vehicle and crashes it into a cactus. Mystery Inc find themselves on the outskirts of a small town. While Scooby-Doo and Shaggy stay with the van, the rest of Mystery Inc. walk into the direction of a town ahead; they make it to a local diner to ask for directions. While waiting, Shaggy and Scooby fight over a Scooby Snack they find. Shaggy and Scooby then encounter a fictional animal called a jackalope. When they chase it into the mouth of a cave; they see a glow in the distance. Two aliens then approach them from behind and chase them towards a diner.

Shaggy and Scooby run into the diner in panic, claiming to have seen aliens. The diner waitress, Dottie, says that they never see the aliens but see strange lights and hear strange sounds at night. The chef, Sergio (pronounced "Serge"), says that a month ago, local cattle vanished overnight without a trace and a lot of people moved away. A man named Lester claims to have been abducted once before, and believes them. He also says that he has pictures; the gang goes to his house to see them, but they turn out to be nothing more than paintings by Lester. Lester then offers to let the gang stay for the night. Daphne and Velma sleep in a bunk bed and Fred sleeps on Lester's couch.

Scooby and Shaggy sleep on the roof, and are abducted. Scooby is the first to see the same two aliens they ran from earlier and wakes Shaggy. The aliens then touch Scooby and Shaggy's forehead while the two of them panic. The Aliens buckle them to beds. The aliens then put wires on them which tickle, Shaggy in the neck and Scooby on the side. Scooby manages to break free from the buckles and runs with Shaggy's bed in while the aliens pursue. Eventually they are trapped and a third alien comes forward with some sort of alien taser, the two black out. The next day the two find themselves in the middle of nowhere. They are awakened by a hippie-chick photographer, Crystal, and her golden retriever, Amber. Scooby and Shaggy fall head over heels in love the moment they lay eyes on them. Crystal and Amber give them a ride back to the diner, Scooby is making more moves than Shaggy. They meet the rest of the gang there with Lester who catch on to them being in love. They were so smitten that for the first and only time the pair have no appetite. When Crystal and Amber leave, Shaggy and Scooby get all washed up for when they can see them again. They go to a mechanic and ask if he can fix their vehicle; he says he'll look over it. They then meet Max who works at the SALF station; they help him load up oil. Crystal and Amber drive Shaggy and Scooby off to go looking for the Jackalope. Shaggy tries to make the Jackalope seem bigger, with no avail. Scooby picks flowers for Amber who gives him a kiss, Scooby rejoices greatly. When Shaggy tries the same thing a spider get into his shirt and he freaks out, still impressing Crystal towards the end.

Velma, Fred, and Daphne meet the crew of SALF. Velma becomes suspicious when she sees dried mud on their boots, since they are in the desert. Later, she decides to take the gang to a canyon where she presumes a river might run. The canyon proves to be dry, but they find mining equipment, and in the caves, gold. Meanwhile, military police make Shaggy, Crystal, Scooby-Doo and Amber leave the area as it's government property. Crystal then tells Shaggy she is really a government agent and not a photographer. She wants them to go back in. Shaggy and Scooby aren't sure, but when they use their charm on them they agree; Amber licks Scooby's cheek and he just laughs. Shaggy leads them to the cave where he first saw the aliens and saw the jackalope disappear. They quickly hide inside when the MPs come back, but are able to trick them into leaving by pretending that Scooby's tail is a snake. A real snake then scares Shaggy and Scooby into going further into the cave with Crystal and Amber close behind. They also discover the gold, but are then found and chased by the aliens and the MPs, the gang too.

The gang gets trapped in a net while Scooby and the others fall off a ledge after being cornered by the MPs. After the aliens send the MP's after them it's revealed that the aliens are really the SALF crew. They hold them hostage as they explain that they stumbled upon this cave when searching for ground to place another SALF dish. Since it was on government land, they decided not to report it, and plan to keep it that way. They are also revealed to be the aliens who abducted Scooby and Shaggy; the UFO was nothing more than a dressed-up helicopter, and the UFO interior was a movie set. Meanwhile, the others wake up and find themselves deep in the cave still close to another ledge.

Crystal and Amber explain that they're aliens from a planet twenty light-years away from Earth, and that they had dressed and acted the way they did because they had gotten their information on Earth from TV and radio programs form the 1960s, and assumed that the people of Earth still talked and dressed like that. Also, it turns out that the UFO that ran the gang off the road near the beginning of the movie was actually Crystal and Amber's ship, which SALF had tracked. Crystal and Amber have to go back to their home planet, but they share a heartfelt goodbye with Shaggy and Scooby.

The SALF-agents are arrested by the authorities, and Buck comes by with the Mystery Machine all fixed up—Buck explains that the radiator patch he put on will hold until they get to the city and charges them $30 for it. Fred and the gang are happy that the van is finally fixed, and as Fred gives Buck the money for the repairs, he questions the mechanic on why he was out in the desert one day—Buck, though obviously very reluctant, reveals to Fred and the girls that a hobby of his is collecting pressed flowers, which was why he was out in desert that day. Fred and the girls are surprised to learn this, but note that the flowers Buck collected as very beautiful—Buck explains that he prefers keeping this particular hobby of his a secret, and Fred and the girls agree not to tell anyone.

After Buck leaves, Daphne notices Shaggy and Scooby staring up at the sky, obviously still sad about Crystal and Amber leaving. Fred and the girls feel bad for Shaggy and Scooby, but they help the duo feel a little bit better by giving them some Scooby Snacks. The gang than drives away just as the Jackalope watches them leave. It then looks up to the sky and sees a shooting star pass by in the sky.

After Warner Bros. pushed their own writers on Scooby-Doo! and the Witch's Ghost, the crew were allowed freedom on this one. Glenn Leopold was credited for "story by" to get the residuals he lost on the previous one; although he did suggest the American Southwest setting and the jackalope for this one.[1] 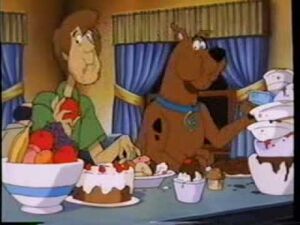 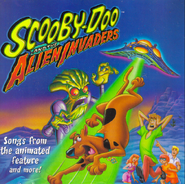 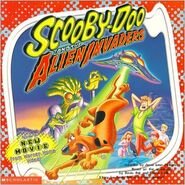 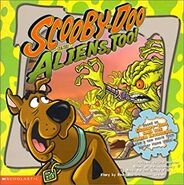 Scooby-Doo and Aliens, Too novel.