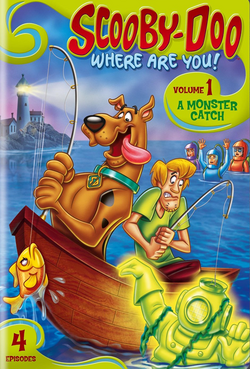 A world without Scooby-Doo?

Hard to imagine, but that's how it was before these four episodes first aired on long-ago Saturday mornings, making Shaggy, Velma, Daphne, Freddy and the snack-loving Scooby-Doo household names. It all starts whn the gang finds an ancient black armor suit that clanks to life in What a Night for a Knight. They then encounter a ghost ship that's clueless, and everyone's clueless...until they solve the mystery of the Hassle in the Castle. High seas turn on the high surf as Scooby-Doo gets tangled up with a slimy seaweed creature in A Clue for Scooby-Doo. The ghosts keep on haunting and out heroes keep on hunting them, this time in a deserted mining town where a 150-year-old miner keeps giving them the swaft! Sometimes it's better to just Mine Your Own Business!

Retrieved from "https://scoobydoo.fandom.com/wiki/Scooby-Doo,_Where_Are_You!:_Volume_1_-_A_Monster_Catch?oldid=284938"
Community content is available under CC-BY-SA unless otherwise noted.