Scooby-Doo, Where Are You!: The Complete 1st and 2nd Seasons 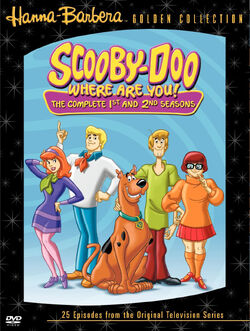 Could a cowardly Great Dane with a penchant for blundering through scary situations become a candidate for generating-spanning stardom? It's no mystery: Scooby-Doo's popularity endures - from Saturday morning TV origins to hit live-action movies. The whodunit format was a daring new frontier for an animated series, but the members of the Mystery Inc. team - hipsterish Shaggy, brainy tomboy Velma, bold and beautiful Daphne and heroic and handsome Fred - have grown to become authentic popular-culture icons. To solve their newest mystery - finding the most awesome Scooby-Doo DVD ever, with 25 vintage episodes and snacking' good extras on 4 discs - you need only follow this simple clue: YOU'RE HOLDING IT!

WHV has misplaced the order of two episodes; A Clue for Scooby Doo with Hassle in the Castle and Go Away Ghost Ship with Spooky Space Kook while Scooby's Night with a Frozen Fright with Jeepers, It's the Creeper are in the correct order instead of production order. On the upside, due to lack of any continuity, the episode misplacement is excusable. The first two are in that order because they're in production order instead of air date order.[1]