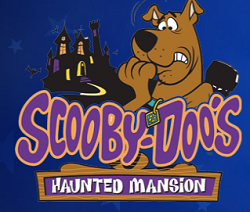 Scooby-Doo's Haunted Mansion is an amusement park ride created by the Sally Corporation. It is done in the "dark ride" style. When Sally Corp refused to renew their license in 2010, the Cedar Fair parks versions were changed to Boo Blasters on Boo Hill.

Retrieved from "https://scoobydoo.fandom.com/wiki/Scooby-Doo%27s_Haunted_Mansion_Ride?oldid=261986"
Community content is available under CC-BY-SA unless otherwise noted.