This article is about the DVD. For the VHS of the same name, look here. 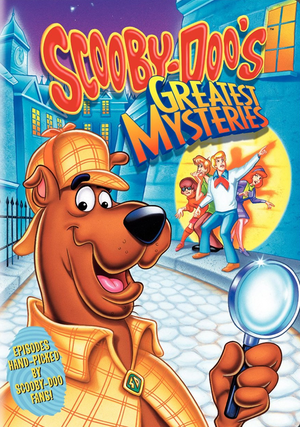 Scooby-Doo's Greatest Mysteries is a DVD which consists of four fan picked episodes of Scooby-Doo, Where Are You! Total run time of 109 minutes. It was released on May 6, 2003 by Warner Home Video.

SCOOBY-DOO fans have spoken! 4 of SCOOBY-DOO'S most popular mysteries - selected by the fans themselves - are now available in this fun DVD.

Watch as Scooby-Doo gets into a mixed-up mystery when he unexpectedly meets the seaweed-covered ghost of Captain Cutler in "A Clue for Scooby-Doo!" Next, see the seafaring sleuths collide with a mystery ship and try to uncover clues to a vanished crew in "Hassle in the Castle!" Then, follow Scooby-Doo and the Mystery, Inc. gang as they outwit a bank robber in "Jeepers, It's the Creeper!" And finally, see them take to the stage to crack some crazy capers in "The Backstage Rage."

Now, get 88 minutes of non-stop action all on this one collectible Scooby-Doo DVD!

Back cover
Add a photo to this gallery

Retrieved from "https://scoobydoo.fandom.com/wiki/Scooby-Doo%27s_Greatest_Mysteries_(DVD)?oldid=368727"
Community content is available under CC-BY-SA unless otherwise noted.