Scoobypedia
Register
Don't have an account?
Sign In
Advertisement
in: Cases set in Egypt, Cases that feature gang members as the culprits, Direct-to-video films, Scooby-Doo! in Where's My Mummy?

Scooby-Doo! in Where's My Mummy?

This article is about the film. For the DVD, look here.

Scooby-Doo! in Where's My Mummy?

Scooby-Doo! in Where's My Mummy? is the ninth in a series of direct-to-video films based upon Hanna-Barbera's Scooby-Doo Saturday morning cartoons. It was given a limited theatrical release in select cities of the United States in November 2005 by Kidtoon Films[2] before being released on DVD on December 13, 2005.

Mystery Inc. fight graverobbers and a curse left behind by Cleopatra while vacationing in Egypt.

In 41 B.C.E., the Roman Army invades Ancient Egypt, forcing Cleopatra to flee for her life along the Nile River. After reaching the Great Sphinx of Giza, the queen goes below to a secret tomb and utters words to cast her curse into the pages of history.

In the present day, Velma is helping Prince Omar Karam with restoring the famous Sphinx. She uncovers Cleopatra's ankh necklace, and shows it to Prince Omar, during which it shines a light out to Cleopatra's hidden tomb beneath the Sphinx, much to their surprise.

Meanwhile, the rest of the gang are on their way to meet Velma, who they haven't seen for six months and deeply miss, especially Scooby. Unfortunately, their engine dies due to their radiator running out of water. Scooby and Shaggy see an oasis and try to swim in it, only to find out that it was all a mirage. Suddenly, an Egyptian nomad, Amahl Ali Akbar, (nicknamed "Triple A" by the gang) and his hawk Horus, appears and helps them complete their journey.

Triple A leaves them outside of the work site of the Sphinx, where they meet Fear Facers host, Rock Rivers, who's trying to regain credibility by filming the curse that has been supposedly unleashed from finding the tomb. This scares Scooby and Shaggy, until Scooby catches a whiff of Velma, leading to a reunion between all of them. Velma also introduces Prince Omar to the gang.

Suddenly, the sinister grave robber named Dr. Amelia Von Butch, along with her minions and several other archeologists, arrive to claim the riches within the tomb. While in the tomb, the hieroglyphics on the tomb walls speak of an undead army rising and people entering the tomb turning into stone, which Amelia and her minions just laugh at. The writing also states that the Nile River will fall and the desert will rise. Against the wishes of Velma and Omar, Dr. Von Butch and her team use explosives to open the doors to the tomb, seemingly unleashing a sandstorm, which apparently turns Prince Omar into a stone statue. Dr. Von Butch decides to enter the tomb anyway, and Scooby and the gang, after much trepidation, follow.

Scooby accidentally sets off a trap, which they all survive, but the undead army have now risen, leading to some of the archeologists and Velma to be kidnapped or turned to stone, while Scooby-Doo and Shaggy are swept through water into a Lost City where they are mistaken by the local Ancient Egypt reenactors for the returning Pharaoh Ascoobis and his faithful manservant, Shagenkhamen.

Fred and Daphne are met by Rock Rivers and Dr. Von Butch and her henchmen inside the tomb where they are all set upon by a swarm of locusts.

Meanwhile Scooby and Shaggy are given a great feast to honor the Pharoh's return. Hotep explains to the two that they are people from many many lands who chose to live the ways of ancient and Egypt. As the feast continues, Hotep disappears into the caves who has a secret plan for the two.

After escaping the tomb and entering a small town in the desert, Fred and Daphne search for Shaggy and Scooby when they are attacked by a disguised Dr. Von Butch and her henchmen Campbell and Natasha, who hit them with a sleeping powder and steals the ankh from them.

Later that night, "Triple A" uses a special herb to wake up Fred and Daphne atop one of the pyramids and tells them that Horus the hawk is looking for Shaggy and Scooby. Horus recovers Scooby's lost collar and leads them to where he found it.

Meanwhile, the Lost City's leader Hotep, attempts to feed Shaggy and Scooby to his Spirit of the Sand, a giant scorpion monster. After a long chase across the city, it turns out to be a giant remote controlled robot that he had built (the water of the Nile River shorts it out). Fred and Daphne arrive with "Triple A," who informs Shaggy, Scooby, and the Lost City's citizens that Hotep is really a brilliant civil engineer named Armin Granger, who has been damming the Nile River illegally, which explains why the Nile was completely dry. Outraged by Hotep's crimes, the Lost City's citizens arrest him and drag him away, possibly sending him to jail. Shaggy and Scooby start to wonder if it was just lucky that they fit the prophecy but Triple A tells them it was fate that brought them here.

After this, Fred & Daphne sadly tell Scooby & Shaggy that Velma has been turned to stone. At this point, while Scooby and Shaggy are distraught, Fred and Daphne are stumped as to whether the curse is real or not. After seen Scooby's collar shine, Daphne realizes that the necklace is gone and Amelia has it. All hope seems lost, but Fred still has a plan.

Inside the tomb, Fred, Shaggy, and Scooby find Rock as a stone statue, and Von Butch, Natasha, and Campbell being taken prisoner by the mummy Cleopatra's undead army. Natasha and Campbell are seemingly turned to stone, with Von Butch being next, who pleads pathetically for her life.

Meanwhile, Scooby and Shaggy disguise themselves as mummy soldiers, but Scooby's tail gives him away when the cloth is unravelled from it. They find a secret room of cement before seeing Fred's signal, which begins a battle between the Ancient Ones army led by Daphne (pretending to be Cleopatra) and Cleopatra's undead army. In the choas, the evil Amelia breaks free and sneaks into the chamber of Cleopatra, stealing the crown of Cleopatra and causing the Nile River to burst through the tomb, undamming the river and flushing out all the riches hidden in the tomb, thus restoring the treasure to the people of Egypt according to Cleopatra's last wish.

The mystery is solved when it is revealed that Cleopatra's undead mummy is really a disguised Velma, who had planned the whole thing along with Prince Omar and his workers in order to scare away all the treasure looters. They had made cement copies of themselves to pass off as victims of "the curse". Prince Omar also tells Rock Rivers that they used his camera to film inside the tomb, which will guarantee Rock's comeback, much to his delight. Dr. Von Butch and her team (who were never turned to stone, just stone copies like Velma and Omar), are caught in a net set up by Fred and "Triple A", tied up, and possibly taken to jail.

Later that night, the Sphinx is finally restored. "Triple A" thanks Velma for having done a great job. But when Shaggy fires an enormous firecracker, it hits the Sphinx's nose and knocks it clean off. Prince Omar states that the Sphinx looks much better like that, and they all laugh. 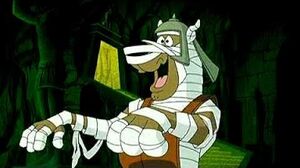 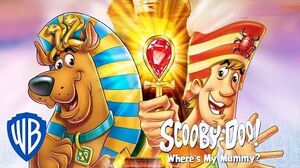 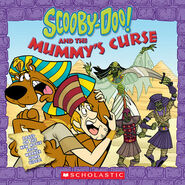