Scoobypedia
Register
Don't have an account?
Sign In
Advertisement
in: Citations needed, Direct-to-video films, Scooby-Doo! and the Witch's Ghost

Scooby-Doo! and the Witch's Ghost

This article is about the film. For other uses, see Scooby-Doo! and the Witch's Ghost (disambiguation).

Scooby-Doo! and the Witch's Ghost

The Mystery Inc. gang travel to a New England town called Oakhaven after being invited by horror writer Ben Ravencroft, but soon find that the ghost of Ben's ancestor is haunting the town.

Ben Ravencroft, a famous horror writer of whom Velma is a big fan, assists the Mystery Inc. gang in solving a case at a museum. Afterwards, Ben invites the gang to his home town of Oakhaven.

But when they arrive there, they find that the town has been built up by its mayor into a tourist attraction, complete with a replica of the town in the 17th century and a supposed ghost of a witch who haunts the town. The mayor and pharmacist Mr. McKnight explains that the ghost is of Sarah Ravencroft, a relative of Ben's, who was persecuted as a witch by the town in the 1600s. But Ben says that Sarah was actually a wiccan who used natural herbs to heal people, and even has a diary of all her patients that Ben wants to find to prove her innocence. Scooby and Shaggy find what appears to be a shoe buckle, and then go to a local diner for food, owned by the friendly Jack.

Ben, Fred, Daphne, Velma, and many visitors stay out late in order to see the witch, but do not, while Scooby and Shaggy are chased by the fireball-throwing witch, and run into Ben and the gang returning home. The gang finds some broken branches at the scene, as well as a local goth girl rock band named the "Hex Girls", comprising of Thorn, Dusk, and Luna.

The gang then split up; Fred and Daphne follow the Hex Girls, Velma and Ben explore an old barn, and Scooby and Shaggy follow the Mayor. Fred and Daphne see Thorn doing some sort of ritual, and become convinced that the Hex Girls are actually witches. Velma and Ben find a cherry picking truck in the barn. Scooby and Shaggy see the Mayor talking to and giving things to many of the townspeople. They then run into the witch again, who chases them past to Mayor and into Velma and Ben. Velma then tells the Mayor that she has a plan to catch the witch.

The Gang, Ben, and the Hex Girls meet in the woods. The witch appears and gives chase, but is captured by Daphne and Fred. The witch is revealed to be McKnight, who is Thorn's father. Velma then locates the truck among the trees. She explains that the truck lifted the witch and made her appear to fly, and also deduces that many townspeople were in on the trick, including Jack and the Mayor. Ben scolds the people involved for exploiting Sarah's good name for their benefit.

Back at Ben's house, the gang apologize to the Hex Girls, and Thorn explains the ritual was just to improve her vocals, and that she is actually 1/16th wiccan. The Mayor and McKnight then arrive, explaining that they had to use the witch to boost the towns economy because of lack of tourists. They then say that they did find the head marker for Sarah's grave, but still don't know where the grave is located. Velma then remembers that the buckle Scooby found is that same one one Sarah's diary in a painting Ben has.

The gang, Ben, The Hex Girls, McKnight, and the Mayor go to the spot where Scooby found the buckle. Scooby digs deeper, and discovers a chest. A excited Ben opens the chest to find not a diary, but a spell book. He then explains to a horrified Mystery Inc. that Sarah was indeed a witch, and that he created the case at the museum in order to meet the gang so they could find the book for him. Becoming insane with his new magical powers derived from the book, Ben captures McKnight, The Mayor, and the Hex Girls before resurrecting Sarah. But Sarah's ghost rejects Ben's idea of ruling the world together, and instead wants to destroy it. Horrified by this, Ben attempts to imprison Sarah back in to book, but she says only a wiccan can return her. Velma then gets an idea, and frees Thorn, Dusk and Luna and asks Thorn to read the spell because only Wiccans imprison Sarah, and sends Scooby and Shaggy to get the book. The gang tries to get the book many times, but Sarah keeps turning pumpkins, trees, and even a turkey into monsters to stop them. Eventually, the gang obtains the book, each throwing it to another person when they get captured, until it reaches Thorn. Thorn reads the spell, sending the witch and Ben, whom she grabbed hold of at the last second, back into the book. A burning branch falls on the book, disintegrating it. The gang then free the others, and the witch's monsters turn back to normal (except for the enormous turkey which the town can now use as a tourist attraction).

Later that night the Hex Girls (and the gang) give a concert to the townspeople and the tourists.

After Scooby-Doo on Zombie Island proved to be a success, Warner Bros. wanted more control and hired "two live-action writers", according to Lance Falk. The film originally ended with the fake Witch's Ghost, but a real one was then added by Glenn Leopold to fit the theme of real monsters like the first one had. He was credited for "story by" in the next film to get the residuals he missed out on this one.[1] 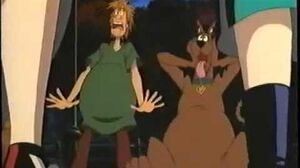 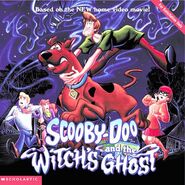 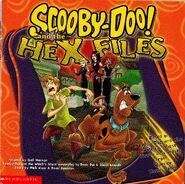 Scooby-Doo! and the Hex Files novel.