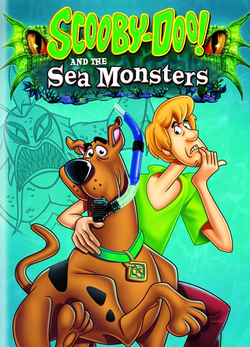 Scooby-Doo! and the Sea Monsters is a DVD compilation of 3 sea monster-themed episodes from What's New, Scooby-Doo?. It was released by Warner Home Video on March 6, 2012.

The scares start in Hawaii, where Scooby-Doo and Shaggy are scarfing down the surf-and-turf menu until a giant serpent tries to swallow them faster than you can say She Sees Sea Monsters by the Seashore. In Uncle Scooby and Antarctica, a friendly penguin invites the Mystery, Inc. crew to visit his polar home, which happens to be haunted by an ice ghost! Then, the gang meets music group Smash Mouth while visiting Australia's Great Barrier Reef to watch Shaggy and Scooby compete in a sand castle contest in Reef Grief! Just when they think it's safe to go back in the water... it isn't.

Retrieved from "https://scoobydoo.fandom.com/wiki/Scooby-Doo!_and_the_Sea_Monsters?oldid=313631"
Community content is available under CC-BY-SA unless otherwise noted.