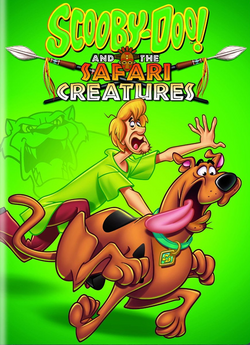 Scooby-Doo! and the Safari Creatures is a DVD compilation of 3 animal-themed episodes from What's New, Scooby-Doo?. It was released by Warner Home Video on March 6, 2012.

The gang flies off to Africa for a video animal Safari, So Goodi!, only to learn that – zoinks! – the creatures are actually shape-shifting Jungle demons! In Homeward Hound, a “fiercely fanged” cat creature petrifies the competing pooches at a dog show, including the visiting Scooby-Doo! Finally, a giant Wakumi bird is stealing sculptures that are scheduled to be housed in a museum in New Mexico, Old Monster. There’s never a dull moment when Scooby-Doo enters the scene!

Retrieved from "https://scoobydoo.fandom.com/wiki/Scooby-Doo!_and_the_Safari_Creatures?oldid=313630"
Community content is available under CC-BY-SA unless otherwise noted.