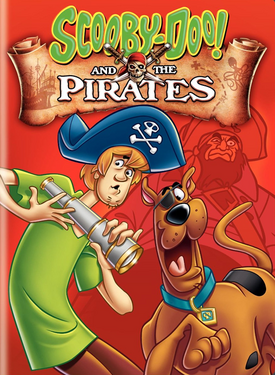 Scooby-Doo! and the Pirates is a DVD compilation of 3 pirate-themed episodes from various Scooby-Doo series. It was released by Warner Home Video on August 30, 2011.

SOLVE 3 MYSTERIES ON THE HIGH SEAS WITH SCOOBY-DOO AND THE MYSTERY, INC.CREW!

Splash into action with seafaring sleuths Scooby-Doo and the Mystery, Inc. gang as they collide with a mystery ship and try to uncover clues from a vanished crew in Hassle in the Castle! Shaggy and Scooby-Doo are then captured by Redbeard the Pirate in Go Away Ghost Ship. Zoinks! If the case isn't solved soon, somebody's going to walk the plank! And when Scooby and his friends get lost in a swamp, they meet up with the Harlem Globetrotters and Redbeard the Pirate - again! - for a swashbuckling adventure worth a treasure chest full of Scooby Snax!

Retrieved from "https://scoobydoo.fandom.com/wiki/Scooby-Doo!_and_the_Pirates?oldid=240950"
Community content is available under CC-BY-SA unless otherwise noted.