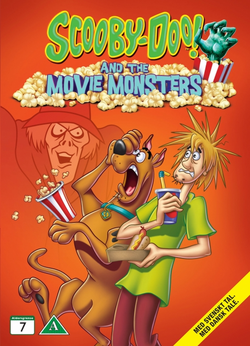 Scooby-Doo! and the Movie Monsters is a DVD containing three episodes from two Scooby-Doo series. It was released on November 20, 2012 in parts of Europe.

Cinema creatures give Scooby-Doo an attack of monster mania! In Never Ape an Ape Man, Daphne's film producer uncle hires the gang as extras on the set of his latest picture. Then, Scooby and the gang get sucked into the television by Zomba, the ghoulish TV show hostess in That's Monstertainment. And on their way home from the Malt Shop, the gang encounters a jewel thief with Nowhere to Hyde. Now they must help solve the case before the thief turns into a mad scientist. Bwahahahaha! Grab some popcorn and watch some scary film fun with Scooby-Doo!

Retrieved from "https://scoobydoo.fandom.com/wiki/Scooby-Doo!_and_the_Movie_Monsters?oldid=313970"
Community content is available under CC-BY-SA unless otherwise noted.