Scoobypedia
Register
Don't have an account?
Sign In
Advertisement
in: Cases set in Australia, Direct-to-video films, Scooby-Doo! and the Legend of the Vampire

Scooby-Doo! and the Legend of the Vampire

View source
watch 03:36
Wiki Targeted (Entertainment)
Do you like this video?
Play Sound

This article is about the film. For other uses, see Scooby-Doo! and the Legend of the Vampire (disambiguation).

Scooby-Doo! and the Legend of the Vampire

Scooby-Doo! and the Legend of the Vampire is the fifth in a series of direct-to-video films based upon Hanna-Barbera's Scooby-Doo Saturday morning cartoons. It was released on VHS and DVD on March 4, 2003.

There is a legend of a vampire named the Yowie Yahoo, who lives in Vampire Rock where the "Vampire Rock Music Festival" is being set up. Many people are excited for it, but some don't think it should take place because it would anger the Yowie Yahoo. One such person is Malcolm Illiwara, but the problem is, his own grandson Daniel is the manager of the contest! One night, as Malcolm and his grandson watch a sure-to-win performer named Matt Marvelous, the Yowie Yahoo appears! The Yowie Yahoo and its three vampire minions capture Matt Marvelous and take him away. Everybody is scared, and Malcolm blames the contest for what happened.

Meanwhile, Scooby-Doo and Mystery Inc. arrive in Sydney, Australia for a vacation after solving the mystery of the Sea Serpent Smugglers on a cruise ship. After seeing Sydney Harbour and Bondi Beach, the gang decides to go to the outback and see a music festival. When they arrive, they meet the Hex Girls (the band the gang had met before when they visited Oakhaven), who are the opening act. They also see Daniel, Malcolm, and Russell, who runs the contest with Daniel. Malcolm says he has warned Daniel about what has happened and drives off. Daniel tells them that most of the performers have left because they are too scared of the vampires. Daniel and Russell then tell them about Wildwind, a musical group who performed at the Vampire Rock Music Festival the year before. They tell the gang Wildwind put on a great performance, but only got third place. They then went into Vampire Rock to camp, but were never heard from again. There were three performers, Dark Skull, Stormy Weathers, and Lightning Strikes. Legend says that they have been turned into Vampires by the Yowie Yahoo. Daniel says he does not believe it, but then Russell reminded him that the three Vampires who were with the Yowie Yahoo when it kidnapped Matt Marvelous looked just like the members of Wildwind!

Fred decides the best way to solve the mystery is to enter the contest as a band, in order to drive the Yowie Yahoo to capture them. Russell is skeptical, but Daniel thinks it is a good idea. The Hex Girls make them look like rock stars, and soon they are on stage. While they are practicing, (but not very well), a golf cart approaches them. In it are Jasper Ridgeway, a snotty manager, and his band, the Bad Omens, who have three performers (King, Queen, and Jack). They criticize the gangs playing and make them leave the stage so they can practice. Then the gang learns that Ridgeway was once the manager of Wildwind, and says that Wildwind was the greatest band he ever managed and is sad that they disappeared. He then complains about the head and camping, and goes back to his "tent", leaving his band to practice. The gang grows suspicious of Ridgeway and thinks he might have put his band up to masquerading as vampires and getting rid of all the other performers. They split up, with Fred, Velma, and Daphne going to Jasper's trailer and Shaggy and Scooby staying at the food stands.

At the trailer, Fred, Velma, and Daphne find that Jasper has lots of mementos of Wildwind, including three copies of the suits the band members used. They also wonder why Jasper did not come to his trailer, (as they have been there); when he said he was going to. Meanwhile, Scooby and Shaggy get chased by the Wildwind Vampires, but eventually loose them. They end up back at the stage, where the Bad Omens are rehearsing. There, they witness the Yowie Yahoo and the Wildwind vampires capture the Bad Omens is the same way they captured Matt Marvelous. They tell the others. Jasper is sad they are gone, but then he says he should have gone back to his trailer, when in fact he was never there at all. Fred decides that everyone should sleep at the same place, so no one gets taken.

During the night, a band named Two Skinny Dudes arrives. They say they have been staying in Vampire Rock, but have not seen anything. Jasper quickly forgets the Bad Omens and asks Two Skinny Dudes if they wanted him to be their manager, which makes the gang suspicious. The next day the gang and Daniel go to see Malcolm. He explains how Wildwind was foolish to go into Vampire Rock. He also says how Vampires hate the sun, cannot run over running water, and cannot be seen in a picture. That night is the performance, and the Hex Girls start things off. However, the Yowie Yahoo and the Wildwind vampires appear and capture the Hex Girls! The crowd thinks it was an act, but the gang decides to investigate the rock.

Inside, Fred, Velma, and Daphne find lots of special effects equipment like fans and lights. However, they also find the Wildwind Vampires and get chased. Scooby and Shaggy get trapped by a group of dingoes. The sound of Fred, Velma, and Daphne running scares off the Dingoes, but then the whole gang gets trapped by the vampires and the Yowie Yahoo. The gang is able to avoid them until the sun comes up. The sun reflects off Scooby-Doo's collar, which shines on the Yowie Yahoo and destroys him. However, the Wildwind vampires are not affected by the sun or running over water, and give chase to the gang. The chase them until the gang and Daniel unleash a trap and capture the "vampires." Jasper and Daniel are confused at who did it, but the gang knows. After splashing water on the faces to get rid of the makeup, the gang shows that it was Two Skinny Dudes and Russell. Daniel and Jasper are surprised, but get even more surprised when the gang unmasks them and it is shown that the members of Wildwind are the actual Vampires. They explain how they wanted to start up their career, so they posed as dead and were planning to perform again. They used special effects to make the Yowie Yahoo and climbing equipment to fly around. When asked about the missing performers, they said they gave them free Great Barrier Reef scuba diving tours and sent them away. Then the Hex Girls and Malcolm show up. They say they were left in the outback because they did not want the trip, but Malcolm found them.

Daniel says that Mystery Inc.'s band is the only one left, so they win. The gang end the festival with a performance of "Scooby-Doo, Where Are You?" to the crowd, and getting their band name, The Meddling Kids. 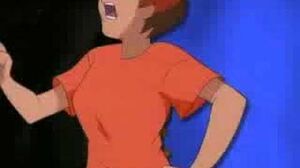 Scooby-Doo and the Legend of the Vampire trailer 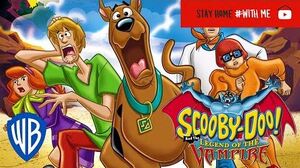 Scooby-Doo! and the Legend of the Vampire First 10 Minutes 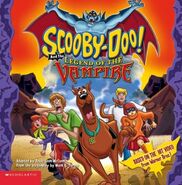