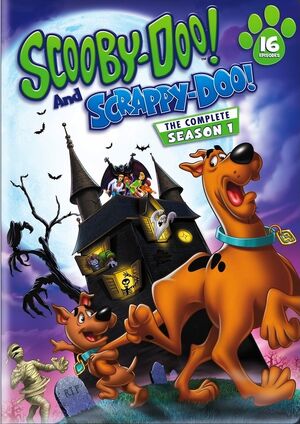 Scooby-Doo! and Scrappy-Doo!: The Complete Season 1 is a 2-disc DVD set, featuring all 16 episodes of the original, half-hour incarnation of Scooby-Doo and Scrappy-Doo. It was released by Warner Home Video on April 28, 2015.[1]

Join Scooby-Doo, Shaggy and the Mystery Inc. Gang for more jitter-inducing mysteries! Along for the ride is Scooby-Doo's nephew - the one and only, ever-fearless Scrappy-Doo! Will the pint-sized pup help the gang overcome all manner of supernatural creeps and crawlies? Tune in to these 16 jijinks-filled episodes to find out! Collected for the first time on DVD, the Complete Season 1 is a trasure trove of classic Scooby-Doo. Get some Scooby Snacks and dig in for some puppy-powered fun!

Retrieved from "https://scoobydoo.fandom.com/wiki/Scooby-Doo!_and_Scrappy-Doo!:_The_Complete_Season_1?oldid=199343"
Community content is available under CC-BY-SA unless otherwise noted.