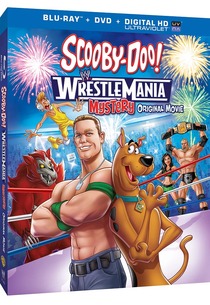 Scooby-Doo! WrestleMania Mystery is the Blu-ray Disc/DVD combo set that was released for the film of the same name. It was released, along with the single DVD version, on March 25, 2014 by Warner Home Video and WWE Studios.

This all-new original movie delivers endless action with Scooby-Doo, Shaggy and the rest of the gang! The mystery begins when Shaggy and Scooby win tickets to WrestleMania and convince the crew to go with them to WWE City. But this city harbors a spooky secret - a ghastly Ghost Bear holds the town in this terrifying grip! To protect the coveted WWE Championship Title, the gang gets help from the WWE Superstars like John Cena, Triple H, Sin Cara, Brodus Clay, AJ Lee, The Miz and Kane. Watch Scooby and the gang grapple with solving this case before it's too late. Pick up this incredible adventure for the whole family today!