Scooby-Doo! Who's Watching Who? is a third-person action adventure video game published by THQ and distributed by Warner Bros. Interactive for the Sony PSP and Nintendo DS. Savage Entertainment developed the graphics for the PSP version, while the DS graphics were developed by Human Soft. In North America, it was released on October 16, 2006, in the EU on November 17, 2006, and Australia on November 23, 2006.

Mystery Inc. are invited to compete against the stars of GSI: Ghost Scene Investigators. 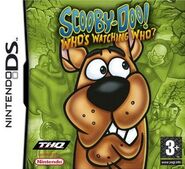 Opening loading screen for PSP game.
Add a photo to this gallery

Retrieved from "https://scoobydoo.fandom.com/wiki/Scooby-Doo!_Who%27s_Watching_Who%3F?oldid=358016"
Community content is available under CC-BY-SA unless otherwise noted.