This article is about the 2006 DTV film. For other uses, see Scooby-Doo and the Pirate (disambiguation)

Scooby-Doo! Pirates Ahoy! is the tenth in a series of direct-to-video films based upon Hanna-Barbera's Scooby-Doo Saturday morning cartoons. It was released on DVD on September 19, 2006.

The Mystery, Inc. gang are caught in the mystery of the Bermuda Triangle, while vacationing on a cruise, courtesy of Fred's parents for his birthday.

Astrocartographer, Rupert Garcia, is in his quarters, trying to make sense of an old, bizarre star map which he recently acquired. The ship sails into a sinister fog, and is soon engulfed. A ghostly pirate brig appears next to the ship, and zombie pirates swarm the ship. The crew disappears while Garcia hides in his quarters with the star map. The villainous Captain Skunkbeard enters the quarters, along with his first mate, the aptly named Woodenleg Wally. The pirates cannot find Garcia, who overhears that the pirates are looking for him and the map. The pirates give up the search and scuttle the ship, and return to their brig and disappear into the fog. Garcia escapes to a life raft, and is marooned on the open sea.

The next day, Fred is treating the Mystery Inc. gang to share in his birthday present; a mystery cruise, compliments of his parents, Skip and Peggy. While preparing for the ship launch, Scooby and Shaggy have a creepy encounter with a sinister-looking cloaked man, who the duo are sure is up to no good. The gang meet the bubbly and hyper Cruise Director, Sunny St. Cloud, and the captain, Crothers. The Captain declares they are bound for the Bermuda Triangle, and St. Cloud promises some creepy intrigue. A montage of sloppy "mysteries" that are staged by St. Cloud and Captain Crothers follow, which the gang solves with ease. This peeves the other guests, who have no mysteries to solve, as they are all wrapped up on the first day. Soon they rescue Garcia, who spins his tale of the ghost pirates. The gang naturally assumes that this is a setup to another mystery. St. Cloud and Crothers are obviously puzzled and have no idea who the man is. He is taken below deck as a man in a jetpack appears from the sky and lands on deck. He turns out to be Biff Wellington, an English playboy and billionaire who is known to be fun-loving yet eccentric. He plans to stay on the ship as well.

That night, the gang attends a costume party dinner. The creepy cloaked man appears on stage, who turns out to be Mr. Mysterio, a famous hypnotist. Shaggy and Scooby are picked from the audience to demonstrate his powers, but they prove immune to his hypnotism: yet the audience falls under the trance, except for the gang, Garcia, and Skip, who were looking a different direction. Mysterio dispels the hypnotism and disappears in a puff of smoke. The creepy fog then appears and swallows the cruise ship. The ghost pirates return and wreak havoc, chasing the cruise guests about, who all mysteriously disappear. A thunderstorm also begins. Skip and Peggy are kidnapped, and the pirates retreat back to the brig and leave. At this time, the gang realizes it is not a sham mystery but a real one, and they and Garcia are the only ones left aboard.

With his help, they follow the glowing trail left by the brig and arrive in a secret harbor. There, they find Garcia's old ship, and then are captured by the ghost pirates, who take them aboard their brig. The pirates are looking to find the Heaven's Light, a meteorite of mystic power, which fell into the triangle ages ago and could be pinpointed by using Garcia's map. They need both the map and Garcia to find it. The gang is tied to the mast along with Skip, but there are no other cruise guests around.

The brig enters the heart of the triangle, and begins to see ghosts from the triangle: The USS Cyclops (AC-4), Flight 19, even a sea serpent. Amidst this, the gang manages to escape and explore below deck. They find a lot of modern equipment that was obviously used to project the ghost images just witnessed. The ship enters an odd ring of rocks, and pulls up the Heaven's Light, which glows yellow.

The gang then engineer a trap, which predictably fails. The pirates then attempt to re-capture the gang, leading to a chase, in which the entire pirate crew are captured. Captain Skunkbeard is revealed to be Wellington, and Wally is revealed to be Mysterio. The rest of the pirates are the cruise guests (including the Captain, St. Cloud, and Peggy), shipmates of Garcia, and past conquests of the pirates. Wellington explains that Mysterio convinced him (and likely hypnotized him) that he was the reincarnation of a pirate from years ago, and could use the meteor to teleport back in time. The crew were just hypnosis victims under Mysterio's power. This is because when Mysterio hypnotized the guests, he made it so he could control them, even after they were released from the trance. Mysterio's motive was that the meteor itself was pure gold and he was going to steal it to make himself rich.

At this time, a fierce storm hits, and the gang deduces the forces of the triangle want the meteor back, so they drop it back in the water, and some steering by Fred narrowly gets the brig out of the ring as it crumbles into the sea. The cruise guests are now using the brig as a large party boat as they sail back to Miami to drop off Wellington and Mysterio to the authorities. 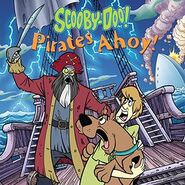