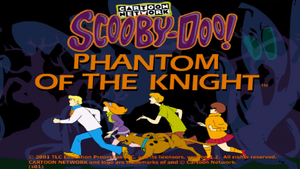 Scooby-Doo! Phantom of the Knight is a 2001 PC game released by The Learning Company. It was included in the Scooby-Doo! Mystery Adventures collection.

Scooby, Shaggy, and the rest of the gang investigate an old castle which turns out to be a tourist attraction named Joust for Fun, which is being haunted by the Black Knight and his fire-breathing pet dragon.

Object depend on the setting chosen and clues found.

The following culprits were the Black Knight and dragon.

Retrieved from "https://scoobydoo.fandom.com/wiki/Scooby-Doo!_Phantom_of_the_Knight?oldid=303519"
Community content is available under CC-BY-SA unless otherwise noted.