Scooby-Doo! Mystery Mayhem is a video game based developed by Artificial Mind and Movement, published by THQ, and distributed by Warner Bros. Interactive Entertainment on the PlayStation 2, Xbox, Gamecube, and Game Boy Advance.

Whilst investigating a standard mystery at Hambridge University, Mystery Inc. discover that a mysterious organization is using pages from an ancient book, the Tome of Doom, to unleash real ghosts and monsters into the world. Armed with the Tome, the gang must re-capture the monsters and uncover clues in order to solve the mystery.

This applies to the home console platforms. 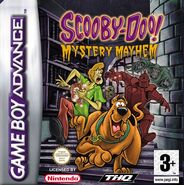