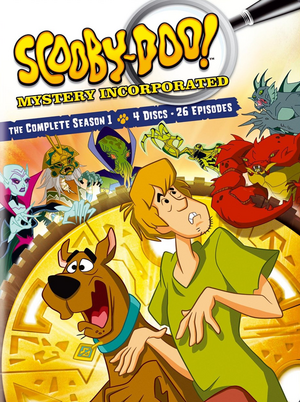 MYSTERY INCORPORATED IS THEIR NAME. CATCHING GHOSTS IS THEIR GAME!

It's the entire first season of the hit TV series! Trap-happy Fred. Danger-prone Daphne. Tech-savvy Velma. Always-hungry Shaggy and Scooby-Doo. Together they are Mystery Incorporated! The Gang lives in Crystal Cove, "The Most Hauntedest Place on Earth," but they've disproved the existence of the supernatural in every creepy case closed. That is until they discover clues about an ancient curse placed on Crystal Cove! The Gang faces more monsters and spooky spirits that are trying to stop any snooping into the dark secrets hidden deep within their home town. Don't end up in the dog house. Pick up this fun, action-packed collection today!

Retrieved from "https://scoobydoo.fandom.com/wiki/Scooby-Doo!_Mystery_Incorporated:_The_Complete_Season_1?oldid=365636"
Community content is available under CC-BY-SA unless otherwise noted.