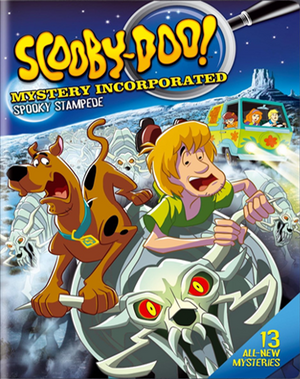 SCOOBY AND THE GANG FACE A SPOOKY STAMPEDE OF NEW MYSTERIES!

Scooby-Doo, Shaggy, Daphne, Fred and Velma are back in all-new mysteries and leave no stone of Crystal Cove unturned as they continue their thrilling and terrifying tour of the “Most Hauntedest Place on Earth!” In these final episodes of Season 2, the Mystery Inc. crew races against time, creepy creatures and other interested parties to solve long-buried secrets of their home town. Can the gang also solve their greatest mystery yet and save Earth from destruction? Zoinks! Jump into The Mystery Machine for one wild ride after the other with Scooby and the rest of Mystery Inc. in this double-disc set! You’ll be on the edge of your seat as they get help from classic Hanna-Barbera adventurers Dr. Benton Quest and Roger “Race” Bannon from Jonny Quest, Dynomutt, Dog Wonder, the Blue Falcon and more!

Retrieved from "https://scoobydoo.fandom.com/wiki/Scooby-Doo!_Mystery_Incorporated:_Season_Two,_Part_2_-_Spooky_Stampede?oldid=363071"
Community content is available under CC-BY-SA unless otherwise noted.