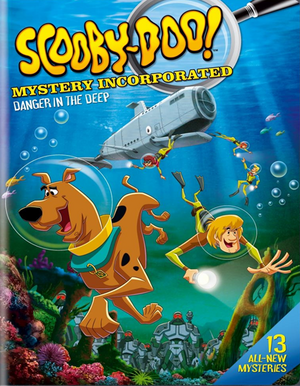 The “most hauntedest place on earth” turns out to be the most hauntedest place under the sea as well! Season Two of the Scooby-Doo! Mystery Inc. TV series begins with Scooby-Doo!, Shaggy, Velma, Fred and Daphne living separate lives after the split-up of Mystery Inc. But the marauding antics of Crybaby Clown draw them back to Crystal Cove, and with the help of brainy newbie Hot Dog Water and sassy Angel Dynamite, the truth behind the mystical Planispheric Discs is closer than ever. Still, things aren’t the same for the mystery-solving crew… friendships – and hearts – have been broken. Will Crystal Cove be left to solve their scary cases alone? Will this be the end of Mystery Inc.? Say it’s not so, Scooby-Doo!...