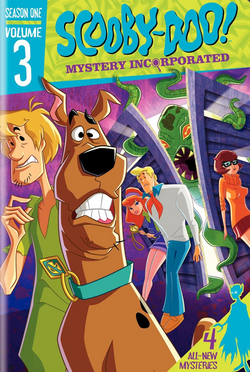 4 MORE FRIGHTFULLY FUN ADVENTURES WITH SCOOBY-DOO AND THE GANG!

Mystery Incorporated is on the case when Crystal Cove, the most haunted place on Earth, sees spooky creatures and supernatural scares in these four episodes from Cartoon Network's hit new series! First, sibling rivalry rises to monstrous heights. Then a robot dog tries to tear the gang apart...literally! A vampire with a thirst for a beauty formula wants to sink her fangs into the kids, and a space creature comes alive from the cover of a science-fiction book for a real page-turner! There are other complications as well: Velma's jealousy of Shaggy and Scooby-Doo's friendship, Daphne's frustration with Fred and his love for traps, and of course, Shaggy and Scooby-Doo's hungry tummies threaten to trip up the smooth course of sleuthing. All of which naturally makes for more scares and laughs to unmask.

Retrieved from "https://scoobydoo.fandom.com/wiki/Scooby-Doo!_Mystery_Incorporated:_Season_One,_Volume_3?oldid=322209"
Community content is available under CC-BY-SA unless otherwise noted.