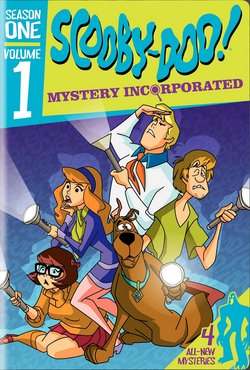 HOP IN THE VAN FOR MYSTERY INC.'S NEW, COOL SERIES OF SPOOKY CAPERS!

Like, it's an all-new Scooby-Doo TV series for families who want their mysteries like Scooby-Doo and Shaggy want their pizza... spicy with extra sauce! Join the gang in Crystal Cove - the most haunted place on Earth - to solve creepy cases packed with fearsome spooks and frights, exciting chases, terrifying surprises and, of course, Freddy's ingenious traps. But the gang doesn't fall for that ghost stuff anymore. They know there's always a bad guy behind the monster suit, until they receive a cryptic clue from the mysterious Mr. E, who challenges them with their greatest mystery - to uncover the secret behind the curse of Crystal Cove! Get trapped with Scooby-Doo, Shaggy, Freddy, Daphne and Velma in four action-packed adventures from the cool, new show that's a lot doggone fun!

Retrieved from "https://scoobydoo.fandom.com/wiki/Scooby-Doo!_Mystery_Incorporated:_Season_One,_Volume_1?oldid=317717"
Community content is available under CC-BY-SA unless otherwise noted.