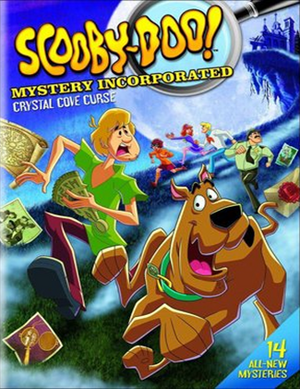 THE CRYSTAL COVE CURSE HAS THE MYSTERY INC. GANG ON THE RUN!

It’s the “Most Hauntedest Place on Earth,” says the sign as you enter Crystal Cove, and it’s home to none other than Scooby-Doo and the gang. Everyone’s favorite meddling kids keep the town’s monsters, phantoms, wild bikers and more in check in every fast-paced episode – you’d expect nothing less – but even more mysterious things are afoot. Like who is Mr. E? What is their sassy, high-kicking friend Angel Dynamite hiding? But the most mysterious things of all are golden discs that every feathered and horned freak in town seems to be after, even though they carry a curse. It’s the very same curse that drove apart the original Mystery Incorporated 20 years ago and now it’s happening all over again!

Retrieved from "https://scoobydoo.fandom.com/wiki/Scooby-Doo!_Mystery_Incorporated:_Season_One,_Part_2_-_Crystal_Cove_Curse?oldid=303609"
Community content is available under CC-BY-SA unless otherwise noted.